What Happened to Theranos CEO Elizabeth Holmes? Everything from Her Net Worth to Where She Is Now

Elizabeth Holmes, the founder of the not-so-revolutionary blood-testing company Theranos, has been gripping the headlines for nearly a decade.

Although she was once seen as an impressive young entrepreneur, a shocking Wall Street Journal expose in 2015 revealed that her blood-testing technology didn’t produce accurate results, giving thousands of people faulty reports.

Holmes stepped down as Theranos CEO in 2018 and was convicted of four fraud-related counts in January 2022.

The saga was fictionalized by streamer Hulu in March 2022’s “The Dropout” with Amanda Seyfried, who won an Emmy for her portrayal of Holmes. 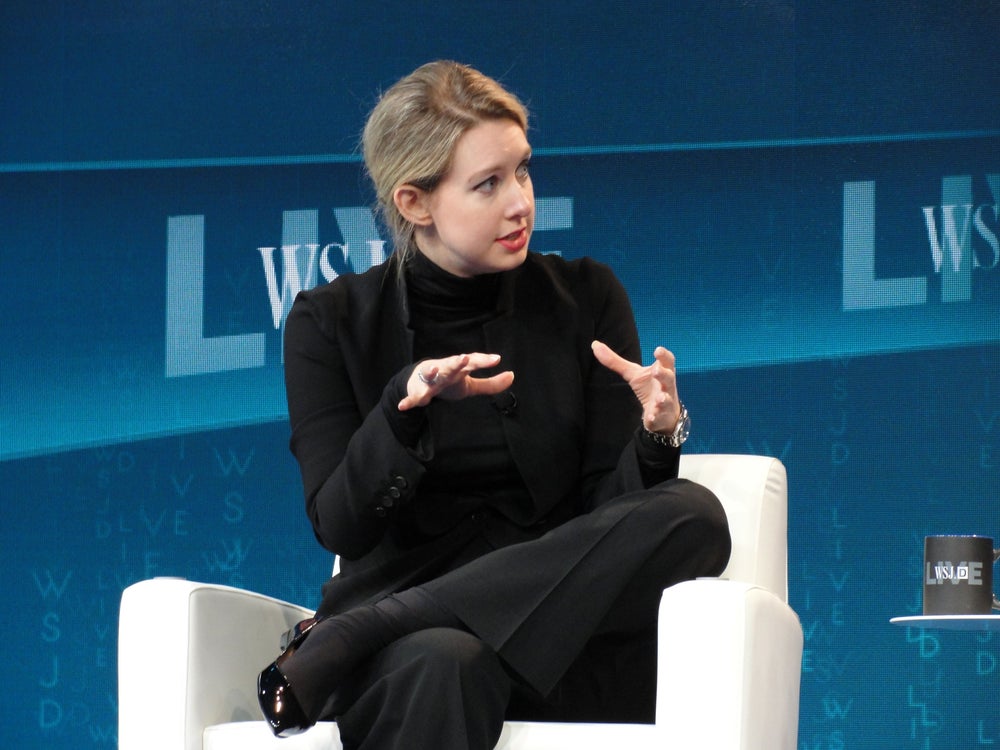 What Is Elizabeth Holmes’ Sentence?

Elizabeth Holmes was sentenced to 11.25 years in prison followed by 3 years supervised release after over three hours of testimony on Friday, November 18, per NBC Bay Area’s live coverage. She’ll be required to surrender at a later date. She was seen walking into court, appearing to be pregnant with her second child, according to a video obtained by The Wall Street Journal.

The amount Holmes will need to pay back to investors will be determined at a later date, NBC’s Scott Budman tweeted from the courtroom.

Holmes spoke at the sentencing, stating, “I regret my failings with every cell of my body.”

Elizabeth Holmes (through tears): “I am devastated by my failings. I have felt deep pain for what people went through, because I failed them.”

“To investors, patients, I am sorry.”

Who Is Elizabeth Holmes?

Elizabeth Holmes’ journey began at Stanford University in 2002, where she had planned to study medicine until she realized she had a fear of needles and blood. Inspired by her own skittishness, she filed a patent for a wearable medical device that could monitor a patient’s blood and administer medication as needed, per Business Insider.

Just two years later, Holmes dropped out of Stanford and started her company, Theranos, from her basement.

Holmes told investors she had proprietary technology that could detect medical conditions like cancer with only a single drop of blood. Additionally, she led investors to believe Theranos offered more than 200 diagnostic tests, although the company was found to be using third-party machines, per BBC.

Based on these promises, she was able to reel in more than $700 million in investments from big names, including Oracle founder Larry Ellison. By stressing the importance of secrecy, she was able to get investors’ money without revealing how the technology worked.

Along with COO Sunny Sunny Balwani — it was later revealed that Holmes and Balwani secretly dated throughout their work together — the duo ran the company under the false notion that the technology worked, introducing their blood testing machine, the Edison.

They continued to rack in millions in funding including several partnerships with major healthcare brands such as Walgreens, where they planned to have Theranos Wellness Centers in locations nationwide, per CNN, and a $350 million deal with Safeway.

Through it all, Holmes branded herself as a “Girl Boss” and even graced the covers of Forbes and Fortune. 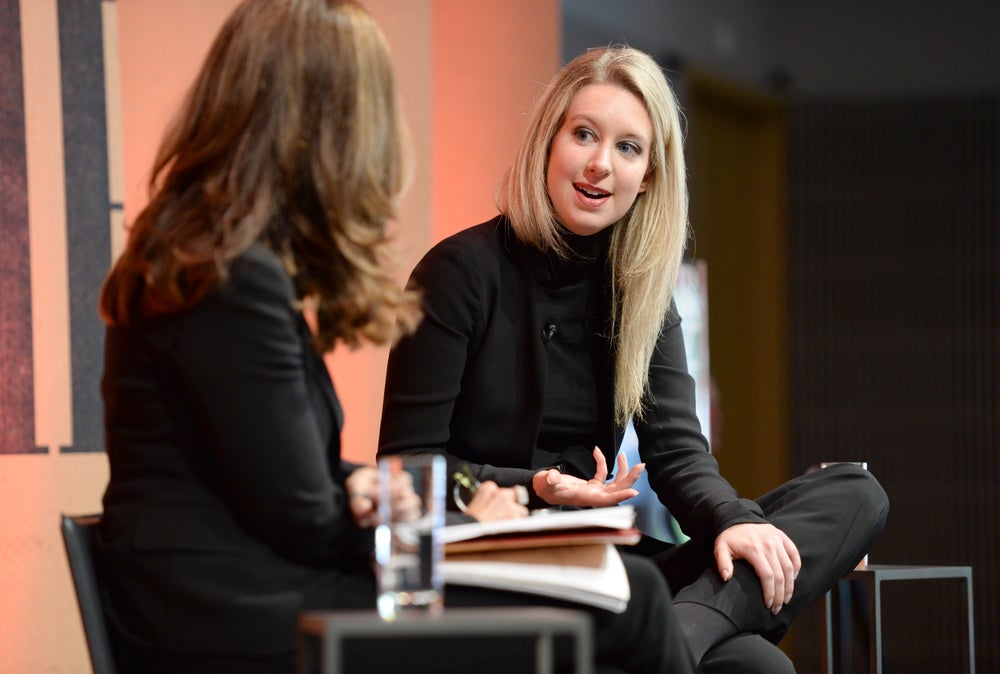 However, Theranos’ chief scientist Ian Gibbons warned Holmes that there had been inaccuracies in the technology and it wasn’t ready for public consumption.

In August 2015, the FDA began investigating Theranos after finding “major inaccuracies” in its testing, and just two months later, the WSJ revealed the company was testing blood samples on traditional blood testing machines after getting inaccurate results from their own Edison machine.

In 2016, the company was investigated by the FDA, the SEC, and the Centers for Medicare & Medicaid Services (CMS), the latter of which said Theranos’ lab was not meeting compliance standards, per CNN and that it determined “deficient practices of the laboratory pose immediate jeopardy to patient health and safety,” per a letter sent to Theranos from the agency.

Because of these findings, Theranos voided two years of blood tests and corrected thousands of reports, per CNN, and the agency banned Holmes from operating a blood-testing lab for two years. Walgreens closed its 40 Theranos Wellness Centers.

What Happened to Theranos?

After Theranos’ lab was shut down, Holmes tried to make a comeback with another product called the “MiniLab,” which would allow her to bypass the CMS’s sanctions by selling the device instead of operating it in its own labs, per CNN.

While Theranos tried to focus on the MiniLab and battle numerous lawsuits from investors, the company laid off 155 employees.

Then in March 2018, the SEC charged Holmes and Balwani, who left the company in 2016, with “massive fraud,” per Business Insider. They were indicted in June with nine counts of wire fraud and two counts of conspiracy to commit wire fraud.

Since Theranos was a private company, Holmes was allowed to stay on as CEO but had to give up financial and voting control of the company, in addition to paying a $500,000 fine and returning $18.9 million in Theranos stock. The same day Holmes was indicted, Theranos announced she would be stepping down as CEO.

In September 2018 the company announced it would be shutting down after 15 years of business. 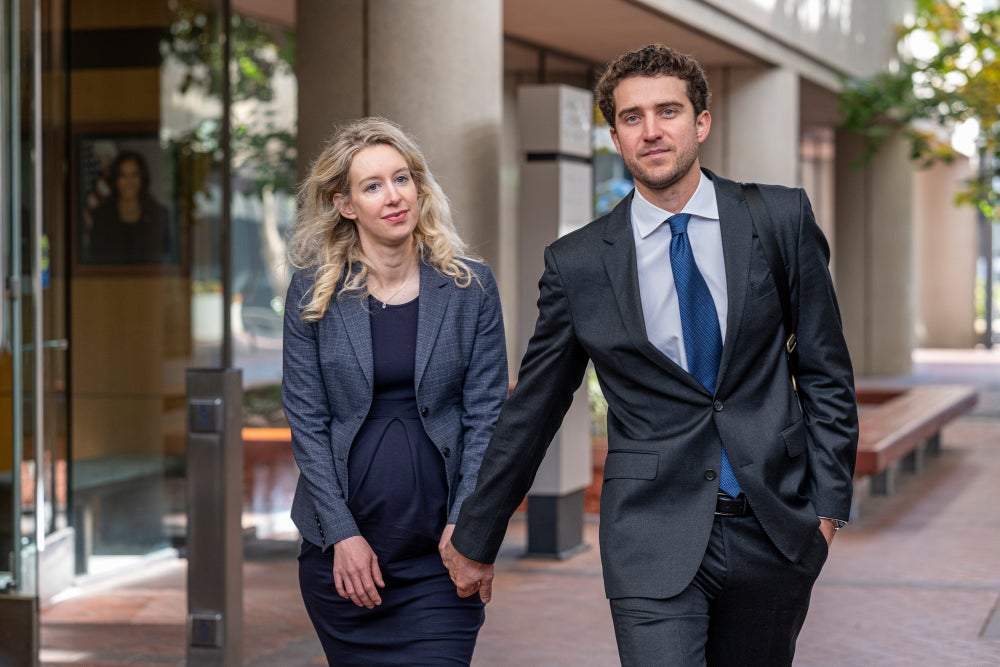 Where Is Elizabeth Holmes Now?

Despite Holmes’ impending legal troubles, her trial was delayed due to the birth of her first child in July 2021.

During her trial, Holmes accused Sunny Balwani of abuse, which he has denied, according to The Guardian.

She was found guilty on four of 11 federal charges in January 2022, including one count of conspiracy to defraud investors and three wire fraud counts, per CNN.

Prosecutors have requested a 15-year sentence and $800 million in restitution, per The Guardian, stating it would “reflect the seriousness of the offenses, provide for just punishment for the offenses, and deter Holmes and others.”

Meanwhile, Holmes’ lawyers requested 18 months of home confinement and no jail time. She was sentenced on November 18.

As for Sunny Balwani, he was found guilty of ten counts of federal wire fraud and two counts of conspiracy to commit wire fraud in July 2022.

What Is Elizabeth Holmes’ Net Worth?

When Holmes was 30 years old, Forbes named her the world’s youngest self-made woman billionaire with a net worth of $4.5 billion. However, the outlet reevaluated the figure in 2016 when various allegations against Holmes came to light.

At that time, experts determined that $800 million was a more realistic figure, but since she only owned half of Theranos’ stock and with a bevy of investors to pay back, the outlet determined her net worth to be zero.

In 2019, Holmes married William “Billy” Evans, who is heir to the Evans Hotel Group, which manages three properties in San Diego and was started by his grandparents in 1953, per Business Insider.

It’s unclear exactly how much Evans or his family are worth, but during her trial, CNBC learned the couple had been living in a 74-acre estate in Woodside, California, worth $135 million.