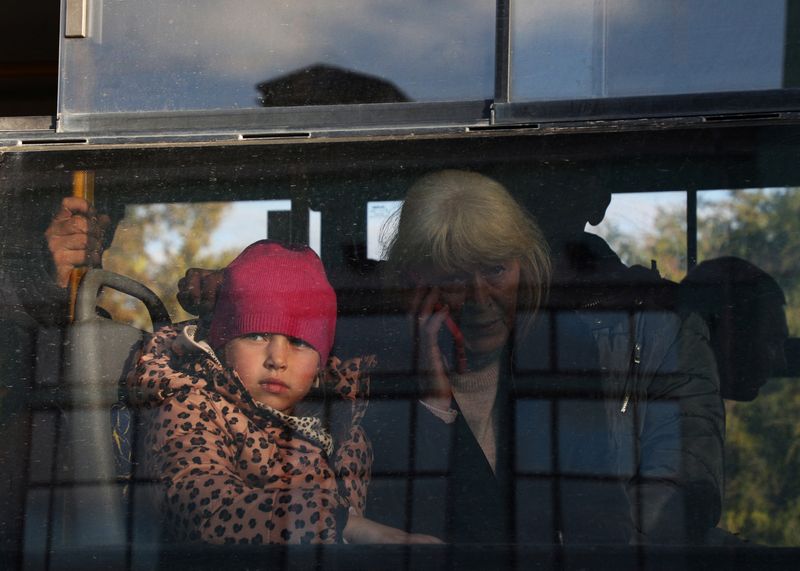 © Reuters. FILE PHOTO – Civilians evacuated from the Russian-controlled Kherson region of Ukraine sit inside a bus upon arrival at a railway station in the town of Dzhankoi, Crimea October 24, 2022. REUTERS/Alexey Pavlishak

FRONT LINES NORTH OF KHERSON, Ukraine (Reuters) – Ukrainian troops at the front line said on Wednesday they were expecting a bitter fight for the southern Kherson region, which Russia now appeared to be reinforcing after days in which it seemed possible that Moscow might withdraw.

In Russia, the military staged a high-profile rehearsal for nuclear war, with state television broadcasts dominated by footage of submarines, strategic bombers and missile forces practicing launches in retaliation for an atomic attack.

Moscow has conducted a diplomatic campaign this week to promote an accusation that Kyiv is preparing to release nuclear material with a so-called “dirty bomb”, an allegation the West calls baseless and a potential pretext for Russian escalation.

The looming battle for Kherson at the mouth of the Dnipro River is expected to be one of the most consequential of the war, determining whether Kyiv can loosen Moscow’s grip on southern Ukraine.

While much of the front line remains off limits to journalists, at one section of the front north of the Russian-occupied pocket on the west bank of the Dnipro, Ukrainian soldiers said Russian shelling was stepping up again after having tailed off in recent weeks.

Radio intercepts indicated freshly mobilised recruits had been sent to the front and Russian forces were firmly dug in.

“They have good defensive lines with deep trenches, and they are sitting deep underground,” said Vitalii, a Ukrainian soldier squatting in a weed-choked irrigation canal, concealed from any prowling enemy drones by overhanging trees.

Both Russia and NATO are holding long-standing annual drills of their nuclear forces this week. But Russia has given the exercises a much higher profile than usual, timing it to coincide with its dirty bomb accusations against Ukraine.

Kyiv says Moscow has been brandishing the prospect of nuclear war to intimidate Western countries into withdrawing their support for Ukraine. Moscow said President Vladimir Putin had personally overseen the nuclear drills remotely.

The Pentagon said a day earlier that Russia had notified it of its intention to carry out the exercises, which reduced the risk of miscalculation at a time of “reckless” Russian nuclear rhetoric.

‘THEY ARE FIGHTING WELL’

Ukrainian forces advanced along the Dnipro River in a dramatic push in the south at the start of this month, but progress appears to have slowed. Russia has been evacuating civilians from the pocket of territory it holds on the west bank this week but says it has no plans to pull out its troops.

Oleksii Reznikov, Ukraine’s defence minister, said wet weather and rough terrain were making Kyiv’s counter-offensive in Kherson harder than it was in the northeast, where it pushed Russia back in September.

At the front, intermittent artillery fire echoed from both sides, with towers of smoke rising in the distance.

A Ukrainian helicopter gunship swept low over the fields, loosed rockets at the Russian positions and wheeled around spitting flares to distract any heat-seeking anti-aircraft rockets fired at it.

“In the press they say the Russians are afraid and will withdraw their troops, but that is not true,” said a unit commander at the front, who asked to be quoted by his nickname, Nikifor. “They are fighting well and hitting our troops.

“In this area, they are very active. They shell every day and are digging trenches and preparing for defence,” said Nikifor, whose location in Mykolaiv province could not be identified under Ukrainian military regulations.

The unit holds a network of well fortified trenches dug into tree lines opposite the Russian fortifications, and recent rains have turned the dirt tracks that access them to mud, especially where tank treads have churned them up.

Since Russia began losing ground in a counter-offensive in September, Putin has taken a series of steps to escalate the conflict, calling up hundreds of thousands of Russian reservists, proclaiming the annexation of occupied land and repeatedly threatening to use nuclear weapons to defend Russia.

This month, Russia launched a new campaign of strikes using missiles and Iranian-made drones against Ukraine’s energy infrastructure, also hitting parks and homes across the country.

The remains of a U.S. citizen killed in Ukraine were turned over to Ukrainian authorities as part of a prisoner swap.

Andriy Yermak, head of Ukraine’s president’s office, identified the U.S. citizen as Joshua Jones, a U.S. Army veteran. The U.S. State Department, which did not identify the person, said the remains would soon be returned to the person’s family.