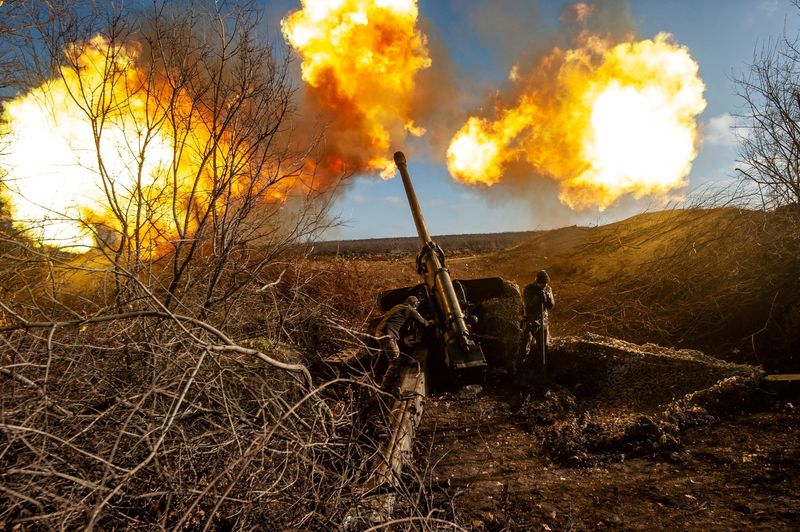 (Reuters) – When Russia invaded Ukraine, Vadym Khlupianets, a 26-year-old ballet dancer at Kyiv’s National Operetta Theatre, joined the army. Nine months later, he was killed by a sniper on the eastern front.

At his funeral, the theatre’s creative director Bohdan Strutnyskii said the young ballet dancer deserved a very different honour: “Applause at the end of a performance, with people asking for an encore.”

Olga Kucher, director of the Zaporizhzhia Regional Children’s Shelter, also found herself in an unexpected role. In March she led 215 orphaned children in woolly hats and puffer coats on a 24-hour train ride, fleeing for their lives.

“My heart is being torn apart,” she said. “And I feel so sorry for these children. They’re so young.”

Ukrainians astonished the world – and themselves – in 2022, withstanding an all-out military assault by a superpower meant to crush them within days.

Millions fled to safety. Millions endured bombardment in basements and bomb shelters. Tens of thousands perished in cities laid to waste by the invaders.

And millions rallied to the cause of a nation, taking up arms, volunteering in ambulances, ferrying food to villages at the front, caring for one another’s children.

Russia says it launched its “special military operation” to protect its security from Western encroachment. Ukrainians, who heard President Vladimir Putin proclaim their national identity a fraud and their land as wrongly stripped from Russia, view the war as an existential struggle – both national and personal.

On the battlefield, David dealt blow after blow to Goliath. In the war’s first hours, Ukrainian defenders obliterated Russia’s elite paratroopers attempting to seize an airfield on Kyiv’s outskirts.

In April, they sank Russia’s flagship cruiser. Last month, they were mobbed by joyous residents as they rode into Kherson, a city Putin had proclaimed Russia’s forever.

Now, with the war’s first winter setting in, it is Russia that is on the defensive, drafting in hundreds of thousands of reservists to protect remaining occupied territory – about a fifth of Ukraine.

Military experts who once debated whether Kyiv could stand for more than a few days, are discussing whether it can win the war outright. Kyiv says it will not stop until it drives all Russian forces out, including from lands occupied since 2014.

Both sides face new challenges. Russia’s retreats, including beyond the wide Dnipro River, have left the front line far shorter and better fortified, making it harder for Ukraine to find new weak spots to repeat the breakthroughs that shifted the war’s momentum in the autumn.

But the brutal winter also brings advantages to Ukrainians defending their own country against conscripted reservists that Russia must feed and supply thousands of kilometres from home.

Ukraine “has been masterful thus far in attacking and defeating Russian forces,” tweeted Mark Hertling, a former commander of U.S. ground forces in Europe. But its next objectives – to breach fortified Russian defences in the east and cross the Dnipro River in the south – are among the toughest any military could face, he said. “They’ll succeed, but not fast.”

Meanwhile, there are no talks to end – or even pause – the war. Kyiv says even a temporary truce would give Russia a chance to regroup and solidify its grip on occupied land.

As 2022 winds down, Russia has been hurling missiles at Ukraine’s energy infrastructure, plunging millions of Ukrainians into darkness and cold. Moscow claims a military justification; Ukraine says this serves no purpose but to harm civilians.

“Cold, hunger, darkness and thirst aren’t as scary and deadly for us as your ‘friendship and brotherhood’,” Zelenskiy said, addressing Russians in a speech in September.

Explore the Reuters round-up of news stories that dominated the year, and the outlook for 2023.