Senators who want to impose tougher penalties when U.S. airlines strand or delay passengers say they finally might be able to turn their ideas...
Read more 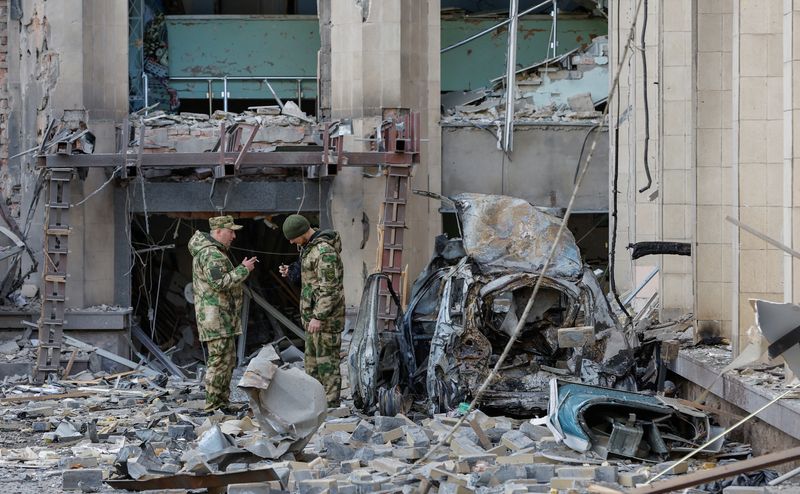 By Pavel Polityuk and Jeff Mason

Ukrainian President Volodymyr Zelenskiy, in his Monday evening video address, said there had been more attacks. “Right now, there is a new Russian drone attack. There are (drones) that have been shot down.”

Interfax Ukraine news agency said Telegram users had reported blasts in the town of Fastiv just outside Kyiv, as well as in the southern port of Odesa.

Russian forces also targeted infrastructure across Ukraine in the second wave of air strikes in a week, like the first coming in the morning with people going to work and school.

Ukrainian soldiers fired into the air trying to shoot down the drones after blasts rocked the capital Kyiv on Monday morning. An anti-aircraft rocket could be seen streaking into the morning sky, followed by an explosion and orange flames, as residents raced for shelter.

Mentioning a new, $725 million military aid package announced for Ukraine last Friday, she said: “We will continue to stand with the people of Ukraine for as long as it takes.

“… We will continue to impose costs on Russia, hold them accountable for its war crimes.”

A pregnant woman was among four people killed in the attack on the residential building, Kyiv mayor Vitali Klitschko said. Ukraine’s Interior Minister Denys Monastyrskyi said there had been deaths in other cities but did not provide a full toll.

Black smoke poured out of the windows of the Kyiv apartment building and emergency service workers toiled to douse flames.

“I have never been so afraid … It is murder, it is simply murder,” said Vitalii Dushevskiy, 29, a food delivery courier who rents an apartment in the building.

His flatmate, who gave his name only as Nazar, said they had tried to leave only to find the staircase “all gone”.

Nearby, Elena Mazur, 52, was searching for her mother, who had managed to call her to say she was buried under rubble.

“She is not picking up the phone,” Mazur said, hoping her mother been rescued and taken to hospital.

Ukraine said the attacks were carried out by Iran-made “suicide drones”, which fly to their target and detonate. The United States, Britain and France agreed that Iran supplying drones to Russia would violate a U.N. Security Council resolution that endorsed the 2015 nuclear deal between Iran and six powers. Iran on Monday stuck to its denial that it is supplying the drones to Russia, while the Kremlin has not commented.

The White House accused Iran of lying when it says Iranian drones were not being used by Russia in Ukraine.

Asked for comment, the Iranian mission to the United Nations repeated a statement issued by the government on Friday that said it supports upholding the U.N. Charter and the U.N.’s attempts to find a peaceful solution to the conflict in Ukraine.

Several EU foreign ministers on Monday called for sanctions against Iran over the transfer of drones to Russia.

Russia’s defence ministry said it had carried out a “massive” attack on military targets and energy infrastructure across Ukraine using high-precision weapons.

Reuters saw pieces of a drone used in the attack that bore the words: “For Belgorod” – an apparent reference to Ukrainian shelling of a Russian border region.

“This is already a tradition: to wake Ukrainians with missiles on Mondays,” said Alla Voloshko, a 47-year-old lawyer who took shelter in the basement of her apartment block.

Ukraine’s military said it had destroyed 37 Russian drones since Sunday evening, or around 85% of those used in attacks. Reuters was not able to independently verify that tally.

Russia denies targeting civilians in what it calls its “special military operation” in Ukraine, launched on Feb. 24 and including the biggest annexation of territory in Europe since World War Two.

In Russia itself, a Russian fighter plane crashed into a residential building in the southern city of Yeysk, engulfing apartments in flames, the regional governor said. At least four people were reported killed, according to Interfax.

RIA news agency said the crash took place during a training flight. It quoted the defence ministry as saying the pilots, who ejected, had reported an engine caught fire on takeoff, and that the plane’s fuel had ignited when it struck the building.

Russia’s state Investigative Committee said it had opened a criminal case. Yeysk is separated from occupied Russian territory in southern Ukraine by a narrow stretch of the Sea of Azov.

The plant, which has been shelled during the war, is occupied by Russian forces but operated by Ukrainian staff. Its reactors need power to keep the fuel inside cool and prevent a meltdown.

Russia has long blamed Kyiv for shelling at the plant.

Moscow and Kyiv on Monday meanwhile carried out one of the biggest prisoner swaps of the war so far, exchanging a total of 218 detainees, including 108 Ukrainian women, officials from both sides said.

Share
Facebook
Twitter
Pinterest
WhatsApp
Previous articleNetflix to Allow Users to Transfer Data Ahead of Account Sharing Clampdown
Next articleFed up with Saudi production cut, Biden is moving to unleash at least 10 million to 15 million barrels of oil from the strategic petroleum reserve

Senators who want to impose tougher penalties when U.S. airlines strand or delay passengers say they finally might be able to turn their ideas...
Read more
Business

How the airline industry is using A.I. to improve the entire experience of flying

When Swiss International Air Lines began to use A.I. technology to boost efficiency, the carrier was able to better optimize more than half the...
Read more

Elon Musk’s Twitter says it has good reason not to pay...

Governments need to work with the private sector to solve their...