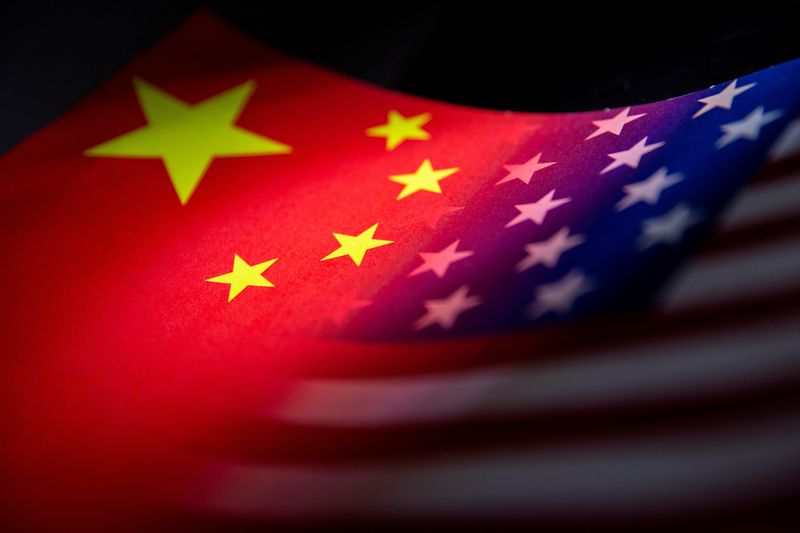 NEW YORK (Reuters) -U.S. prosecutors said on Monday they have charged two Chinese nationals with trying to obstruct prosecution of a Chinese telecommunications company that a person familiar with the matter identified as Huawei Technologies Co Ltd .

Prosecutors said the case is representative of a broader pattern of unlawful influence efforts by China, and announced they had also charged 11 people in two other cases with spying for Beijing or intimidating Chinese dissidents.

In the case involving the alleged efforts to tamper with the Huawei investigation, prosecutors said two Chinese intelligence officials attempted to recruit a U.S. law enforcement agent to work as their spy. However, the recruit was actually working as a double agent for the United States.

Chinese nationals Guochun He and Zheng Wang were charged with trying to interfere in the prosecution, the prosecutors said. Court documents did not name the company, but the complaint referenced the same dates in which the U.S. unsealed its charges against Huawei, in 2019 and 2020.

A spokesperson for Huawei could not be reached for comment on Monday. China’s embassy did not immediately respond to a request for comment.

In addition to the case against the two Chinese nationals accused of interfering in the Huawei prosecution, the Justice Department also announced charges in two other schemes.

The second case charges four Chinese nationals out of New Jersey with running a decade-long intelligence campaign, while the third accuses seven others of waging a harassment campaign against a U.S. resident in a bid to convince him to return to China.

Of the 13 people charged, 10 are Chinese intelligence officers and Chinese government officials. All but two of the suspects remain at large. Washington does not have an extradition treaty with China.

“The Justice Department will not tolerate attempts by any foreign power to undermine the rule of law upon which our democracy is based,” Attorney General Merrick Garland told a news conference.

Huawei was indicted in 2018 for allegedly misleading HSBC and other banks about its business in Iran, which is subject to U.S. sanctions. In 2020, other charges were added to the case, including conspiring to steal trade secrets from six U.S. technology companies and helping Iran track protesters during anti-government demonstrations in 2009. The firm has pleaded not guilty.

The complaint against He and Wang alleges they tried to obtain confidential information concerning witnesses, trial evidence and any potential new charges the company could face.

It alleges they tried to recruit someone from a U.S. law enforcement agency who they thought would help them spy for China. The recruit, referred to only as “GE-1,” was actually working as a double agent for the United States under FBI supervision, the complaint says.

Since October 2021, He and Wang paid the recruit $14,000 plus $600 worth of jewelry, in exchange for what they believed was confidential information about the Justice Department’s investigation and criminal prosecution of the company, the complaint said.

According to court papers, He and Wang first started trying to access nonpublic information about the Justice Department’s investigation when the company was initially charged in 2019.

But their activity escalated in the summer of 2021, with He asking GE-1 about the details of meetings with the U.S. Attorney’s Office for the Eastern District of New York as prosecutors were discussing preparations for the jury trial.

In response, GE-1 passed He a piece of paper that appeared to be marked as classified. That page purported to discuss a plan by federal investigators to arrest two of the company’s China-based executives.

Later that same year, GE-1 also passed along a second page that also purportedly discussed legal strategy, including the use of several cooperating witnesses in the prosecution.

“Each of these cases lays bare the Chinese government’s flagrant violation of international laws, as they work to project their authoritarian view around the world,” FBI Director Chris Wray said on Monday.