Smartphone in hand, Ukraine’s president takes centre stage in a capital under attack

Senators who want to impose tougher penalties when U.S. airlines strand or delay passengers say they finally might be able to turn their ideas...
Read more 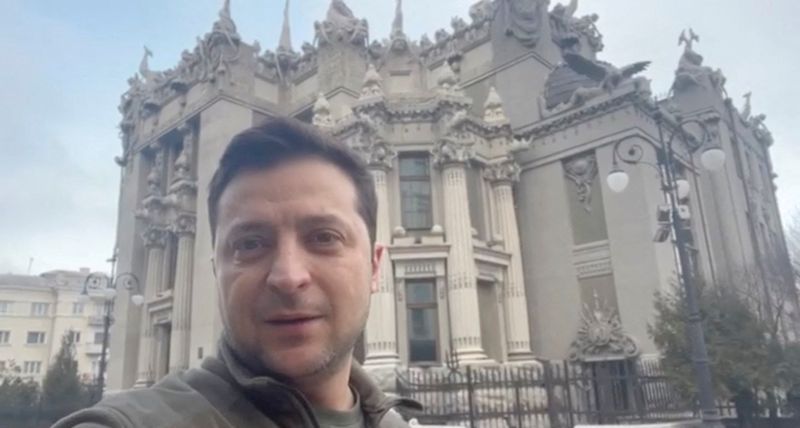 LVIV, Ukraine (Reuters) – The morning after Russian missiles rained down on Kyiv, Ukrainian President Volodymyr Zelenskiy addressed the nation in his favourite style: the selfie video.

Unshaven, wearing a khaki jacket and flashing a smile, he told the nation that contrary to reports of him trying to flee, he was staying put in the capital.

“Good morning to all Ukrainians! Lately there has been a lot of fake information online that I am calling on our army to lay down their arms and to evacuate. Listen. I am here,” he said, in a video that received 3 million views on Instagram in an hour.

The setting was suitably eerie, with Zelenskiy standing in the morning light in front of the “House with Chimeras”, an Art Nouveau landmark covered in otherworldly animal figures across the road from his presidential office in Kyiv.

It has been an unlikely transformation for the 44-year-old, who was a comedian and actor with no political experience before he was elected as president in 2019 – except when he played a fictional president in a satirical TV series.

At the beginning of the crisis, some Ukrainians on social media feared Zelenskiy was out of his depth against veteran Russian President Vladimir Putin, as Moscow massed troops on the border to launch a full-scale invasion of Ukraine.

He had been criticised for taking public swipes at the United States and other friendly powers when he felt they were not being sufficiently supportive.

But Zelenskiy’s refusal to evacuate with Russian troops closing in on Kyiv and his calm presence in social media videos has won plaudits, even from self-described sceptics.

“Whatever happens next, history will remember the simple physical courage Volodymyr Zelens’kyi displays in remaining in his capital, with his people, amidst a horrible invasion, knowing that he is its target,” Timothy Snyder, a history professor specialising in Ukraine at Yale said on Twitter (NYSE:).

Olena Halushka, an activist at a well-known Ukrainian anti-corruption organisation, said on Twitter she had misjudged him. “I couldn’t imagine I’ll be proud of him as the supreme commander. He is worthy of our incredible nation.”

Zelenskiy has been a prolific social media user throughout his time in politics, goading his rivals during the election campaign in 2019, snapping pictures and videos of himself at the gym, in his office or addressing the nation with instructions during the coronavirus pandemic.

Critics and political rivals have often sought to label him as a “clown” unsuited for high office.

Before 2019, he dressed up in buffoonish costumes on stage, performed song and dance acts and, as the fictional president on TV, drunkenly fell into a swimming pool after a meeting with the head of the International Monetary Fund.

Now, he is posting videos trying to give reassurance.

In a previous selfie video, he stood on the street with his inner circle, showing them that his chief of staff, prime minister and closest advisers had also not left the capital.

His style stands in contrast with Putin, who has often kept even close officials on the other side of a long table during meetings during the coronavirus pandemic.

Nassim Taleb, the best-selling author of the book “The Black Swan”, compared Zelenskiy to the images that Putin has used in the past to project strength, including images of him riding bare-chested on horseback.

“Putin the poseur on horseback is hiding in his remote bunker, while Zelenski, the former comedian, is risking his life on the frontline,” he said.

On camera, Zelenskiy has spoken mainly in Ukrainian but also switched to Russian to address the Russian people, urging them to come out into the streets to protest the war.

Vyachslav Volodin, speaker of Russia’s lower house of parliament, asserted on Saturday without evidence that Zelenskiy had fled to the western city of Lviv and that his self-recorded video appearances were in fact pre-recorded.

There was heavy fighting in several parts of the country on Saturday including clashes in the capital, and there have been media reports of Zelenskiy declining offers from foreign governments to be evacuated.

Disclaimer: Fusion Media would like to remind you that the data contained in this website is not necessarily real-time nor accurate. All CFDs (stocks, indexes, futures) and Forex prices are not provided by exchanges but rather by market makers, and so prices may not be accurate and may differ from the actual market price, meaning prices are indicative and not appropriate for trading purposes. Therefore Fusion Media doesn`t bear any responsibility for any trading losses you might incur as a result of using this data.

Fusion Media or anyone involved with Fusion Media will not accept any liability for loss or damage as a result of reliance on the information including data, quotes, charts and buy/sell signals contained within this website. Please be fully informed regarding the risks and costs associated with trading the financial markets, it is one of the riskiest investment forms possible.

Senators who want to impose tougher penalties when U.S. airlines strand or delay passengers say they finally might be able to turn their ideas...
Read more
Business

How the airline industry is using A.I. to improve the entire experience of flying

When Swiss International Air Lines began to use A.I. technology to boost efficiency, the carrier was able to better optimize more than half the...
Read more

Elon Musk’s Twitter says it has good reason not to pay...

Governments need to work with the private sector to solve their...