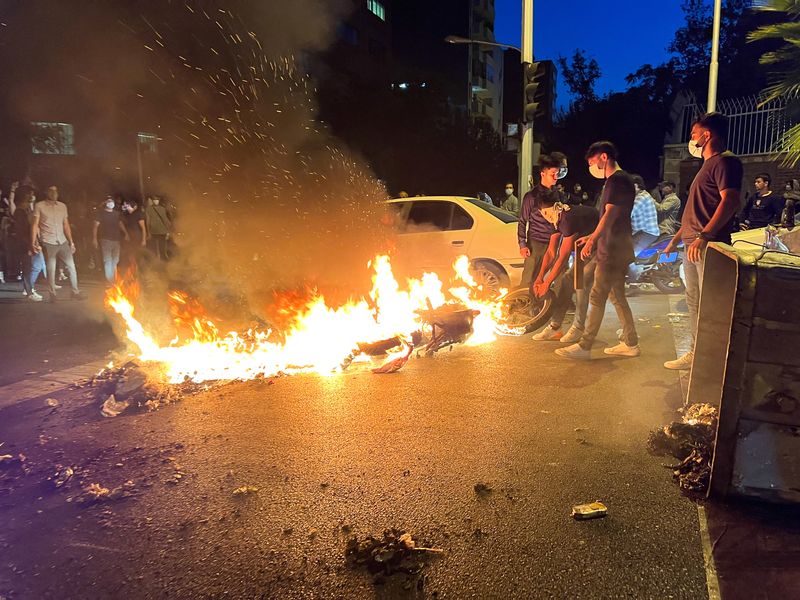 © Reuters. FILE PHOTO: A police motorcycle burns during a protest over the death of Mahsa Amini, a woman who died after being arrested by the Islamic republic’s “morality police”, in Tehran, Iran September 19, 2022. WANA (West Asia News Agency) via REUTERS

DUBAI (Reuters) -Protesters rallied across Iran on Saturday and strikes were reported throughout the country’s Kurdish region, as demonstrations against the death of a woman in police custody entered their third week.

The protests, sparked by the death of Mahsa Amini, a 22-year-old from Iranian Kurdistan, have spiralled into the biggest show of opposition to Iran’s clerical authorities since 2019, with dozens of people killed in unrest across the country.

People demonstrated in London and Paris and elsewhere on Saturday in solidarity with Iranian protesters, some holding pictures of Amini, who died three days after being arrested by the Islamic Republic’s morality police for “unsuitable attire”.

In Tehran’s traditional business district of Bazaar, anti-government protesters chanted “We will be killed one by one if we don’t unite”, while elsewhere in the capital they blocked a main road with a fence torn from the central reservation, videos shared by the widely followed Tavsir1500 Twitter (NYSE:) account showed.

Students also demonstrated at numerous universities. At Tehran University, dozens were detained, Tavsir1500 said. The semi-official Fars news agency said some protesters were arrested in a square near the university.

Tavsir1500 also posted what it said was a video taken at the gates of Isfahan University during which shots could be heard. A separate video showed tear gas being fired at the university, dispersing a group of people.

Reuters could not verify the social media reports.

The protests began at Amini’s funeral on Sept. 17 and spread to Iran’s 31 provinces, with all layers of society, including ethnic and religious minorities, taking part and many demanding Supreme Leader Ayatollah Ali Khamenei’s downfall.

Amnesty International has said a government crackdown on demonstrations has so far led to the death of at least 52 people, with hundreds injured. Rights groups say dozens of activists, students and artists have been detained.

In London, about 2,500 people staged a noisy protest in Trafalgar Square, waving Iranian flags. Few women among the mostly Iranian crowd agreed to be interviewed on camera, fearful of identification and reprisals by the authorities.

In central Paris, a crowd of several dozen people gathered to show support for Iranian protesters, holding Iranian flags and pictures of victims who have died in the protests.

Iranian authorities say many members of the security forces have been killed, accusing the United States of exploiting the unrest to try to destabilise Iran. State media has branded protesters as rioters and seditionists.

The Revolutionary Guards said four members of its forces and the volunteer Basij militia were killed on Friday in attacks in Zahedan, capital of the southeastern Sistan-Baluchistan province.

State television had said on Friday that 19 people, including members of the security forces, had been killed in Zahedan after unidentified armed individuals opened fire on a police station, prompting security forces to return fire.

A lawmaker from Zahedan said security had been restored to the city on Saturday, a semi-official news agency reported.

Authorities blamed a separatist group from the Baluchi minority for starting the shootout in Zahedan. State media said two prominent militants linked to that group had been killed.

IRNA posted a video showing destroyed cars, an overturned and burning trailer or bus, and fires in burnt-out buildings and shops, describing it as footage of “what the terrorists did to people’s shops last night in Zahedan”.

Reuters could not verify the footage.

Protests have been particularly intense in Iran’s Kurdistan region, where authorities have previously put down unrest by the Kurdish minority numbering up to 10 million.

Fearing an ethnic uprising, and in a show of power, Iran fired missiles and flew drones to attack targets in neighbouring northern Iraq’s Kurdish region this week after accusing Iranian Kurdish dissidents of being involved in the unrest.

Shops and businesses were on strike in 20 northwestern cities and towns on Saturday in protest against attacks on Iraq-based armed Kurdish opposition parties by Iran’s Revolutionary Guards, the Kurdish rights group Hengaw reported.

It also said security forces had fired at protesters in Dehgolan and Saqez, Amini’s hometown.

A video posted by Hengaw showed men speeding on motor-bikes through a street with shuttered shops, describing them as “repressive forces on the streets of Saqez”.