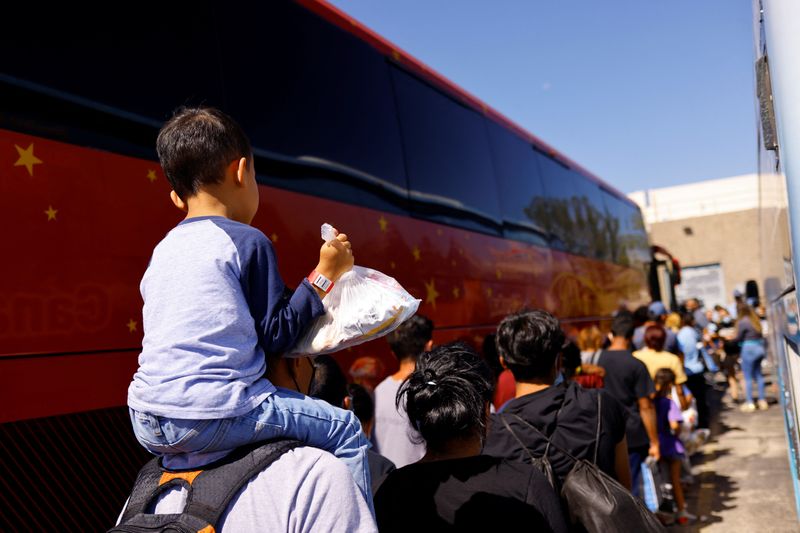 © Reuters. FILE PHOTO: Migrants, mostly from Venezuela, queue to board a bus to New York at the Migrant Welcome Center managed by the city of El Paso and the Office of Emergency Management, in El Paso, Texas, U.S., September 16, 2022. REUTERS/Jose Luis Gonzalez/File

Half of the refugee and migrant population across Latin America and the Caribbean cannot afford three meals a day and do not have access to decent or safe housing, according to the statement.

Many Venezuelans are forced to resort to sex, begging or indebtedness, to make ends meet, the IOM added.

The number of Venezuelans migrating irregularly has risen in 2022, representing the vast majority of foreigners crossing the treacherous Darien jungle which links Panama with Colombia.

As of October 2022, more than 7.1 million Venezuelan refugees and migrants have left their home country, fleeing poverty and violence and relocating around the world.

But increased living costs, the impact of the pandemic, and rising unemployment have exacerbated migrants’ vulnerability, making it difficult for many Venezuelans to integrate and rebuild in host communities, the IOM statement noted.

While host countries have made great efforts to address migrants’ needs, greater international support is required, U.N. Refugee Agency Representative for Venezuelan migrants Eduardo Stein said in a conference to present the study.

“Regularization is only the first step towards integration and must be accompanied by policies that allow refugees and migrants to become self-sufficient,” Stein added.

The IOM did not specify what percentage of the migrants are refugees but the United Nations High Commissioner for Refugees (UNHCR) defines refugees as people who leave their country to flee conflict and persecution, while migrants leave behind their homes to improve their lives with better work, education, family reunion or other reasons.

Meanwhile, some 10,000 migrants – mostly Venezuelans – remain trapped in a town in northwestern Colombia awaiting a boat to cross the Gulf of Uraba and enter Panama, hoping to reach the United States, local authorities said on Wednesday.