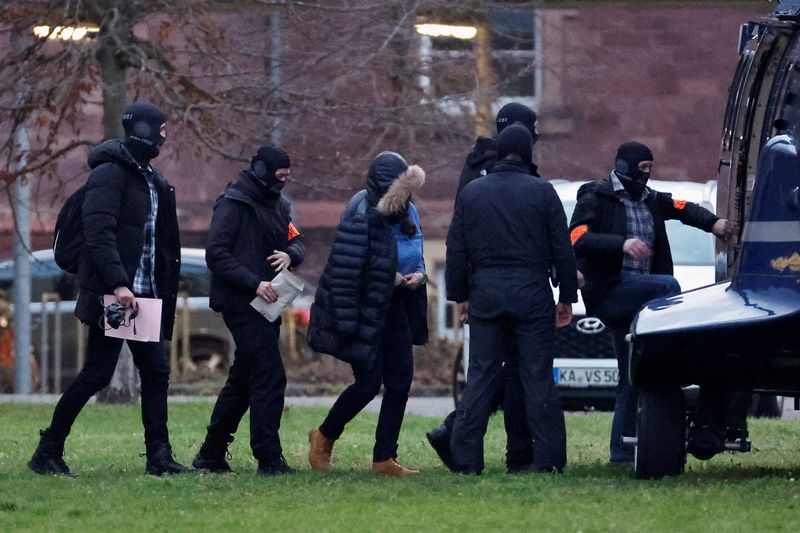 © Reuters. FILE PHOTO: Police escorts a person after 25 suspected members and supporters of a far-right group were detained during raids across Germany, in Karlsruhe, Germany December 7, 2022. REUTERS/Heiko Becker

By Miranda Murray and Rachel More

BERLIN (Reuters) – German police plan further arrests as they investigate a far-right group that prosecutors say was preparing to overthrow the state and install a former member of a German royal family as national leader.

Investigators have said the group, many of whom were members of the Reichsbuerger (Citizens of the Reich) movement, planned to install aristocrat Heinrich XIII Prinz Reuss as leader of a new state and found evidence that some members planned to storm the Bundestag and arrest lawmakers.

Heinrich is a descendant of the royal House of Reuss in the eastern state of Thuringia. Aged 71, he has been working as a real estate developer and was arrested in the financial capital Frankfurt on Wednesday.

An Interior Ministry spokesperson said on Thursday the raids carried out the previous day were the most extensive “executive measures” against the Reichsbuerger ever seen in Germany.

On the security risk posed by the Reichsbuerger she added: “The potential danger remains high and the security authorities are monitoring the situation with great attention.”

Nineteen of the alleged plotters were remanded in custody on Wednesday, while another six were set to go before a judge on Thursday, prosecutors said. Many of the suspects are over 50, and they encompass right-wingers, COVID deniers and people who reject the modern German state.

Holger Muench, head of the federal police office, told broadcaster ARD on Thursday the number of suspects in the case now stood at 54, and that that figure could rise.

The discovery of the alleged plot came as a shock in one of Europe’s most stable democracies and largest economy.

“It’s not really comprehensible: you hear about such plans from other countries but for this to happen outside my front door?” said Melanie Merle, who lives close to the apartment in the financial capital Frankfurt where Heinrich was arrested.

“The government we have is not ideal but probably better than what they had planned,” she laughed.

Neither the House of Reuss nor Heinrich’s office responded to requests for comment.

A former parliamentary lawmaker from the far-right Alternative For Germany (AfD) was also among those detained, according to prosecutors.

Prosecutors said the group was inspired by the deep state conspiracy theories of Germany’s Reichsbuerger and QAnon, whose advocates were among those arrested after the storming of the U.S. Capitol in January 2021.

Members of the Reichsbuerger do not recognise modern-day Germany and its borders as a legitimate state. Some are devoted to the old German “Reich” (empire) under a monarchy, with some also sharing Nazi ideas and believing Germany is under military occupation.

Police on Thursday searched the Waidmannsheil hunting lodge in Thuringia, said to belong to Heinrich.

The deputy mayor of the town said local people had been sent a letter, telling them passports issued by German authorities were not valid.

“All citizens of Bad Lobenstein received a letter this past summer in which we were told that we were not German because our passports were not German,” Andree Burkhardt told Reuters.

“We were then given the opportunity to apply for our German origin documents with the Reuss administration. This of course provoked a huge outcry among the population,” he added.

Thuringia interior minister Georg Maier singled out the AfD, which is in the state parliament, for becoming an interface for right-wing extremists and spreading what he called fantasies about toppling the state.

“People are scared, and the AfD takes advantage of that and offers simple solutions,” said Maier, who is from Chancellor Olaf Scholz’s Social Democratic Party.

The AfD in a statement on Wednesday condemned the far-right group’s efforts and expressed confidence in the authorities’ ability to bring clarity to the situation quickly and completely.