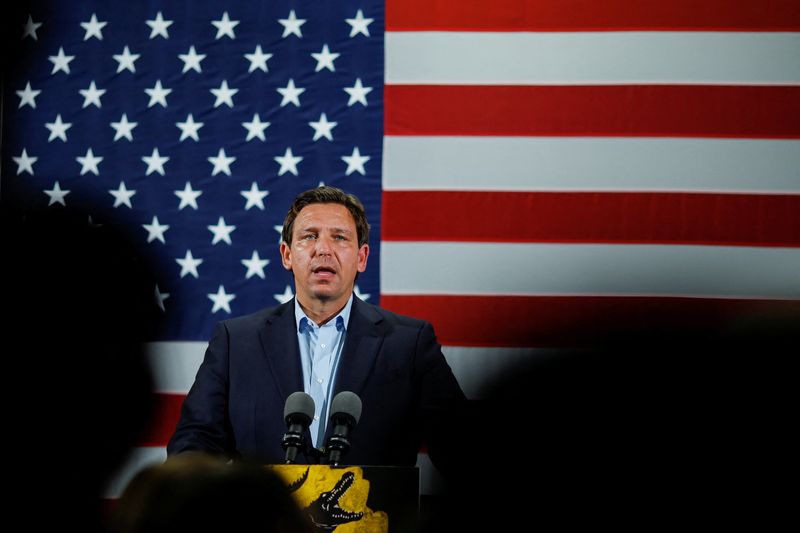 (Reuters) – Republican Ron DeSantis was re-elected governor of Florida on Tuesday, Edison Research projected, setting him up for a possible presidential run in 2024.

DeSantis, who won office by less than half a percentage point four years ago, easily defeated Democratic challenger Charlie Crist, a former Republican governor who switched parties and won a congressional seat as a Democrat.

DeSantis, 44, is widely expected to seek the Republican nomination for the White House in 2024. That likelihood has already drawn the ire of Republican former President Donald Trump, 76.

Trump has nicknamed him Ron De-Sanctimonious.

Trump said he would make a major announcement next Tuesday, when he is widely expected to declare his candidacy.

In all, 36 states will elect a chief executive in the U.S. midterm elections on Tuesday, with the future of abortion rights and democratic elections at stake in competitive elections across the country.

The high stakes brought increased money and attention to the state-level races, which typically get overshadowed in midterm elections by the fight for control of Congress.

Democrats are fighting to keep control of governorships in Michigan, Pennsylvania and Wisconsin to maintain the power to veto any legislation by the Republican-controlled legislatures that might curb abortion rights and voting access.

Republican victories in those presidential battleground states and Arizona could have implications for the 2024 White House election. The party’s nominees have embraced Trump’s false claims that the 2020 election was stolen.

In Arizona, which has one of the country’s closest gubernatorial races, Trump-backed candidate Kari Lake has repeated his assertions about voter fraud and said she would not have certified President Joe Biden’s victory in that state.

Her opponent is Arizona Secretary of State Katie Hobbs, a Democrat who rose to national prominence in 2020 when she defended Arizona’s election victory for Biden.

In Texas, Republican Governor Greg Abbott is expected to win a third term despite a lively campaign by his Democratic opponent, former U.S. congressman Beto O’Rourke.

A three-way race in Oregon could result in a Republican winning the state’s governorship for the first time in 40 years.

Democrat Tina Kotek and Republican Christine Drazan are locked in a close battle for the open seat, and independent candidate Betsy Johnson, a former Democrat, could potentially siphon votes from Kotek.

While Democrats have stressed abortion rights and democracy, Republicans have focused largely on fears of rising crime and inflation, which they blame on Democratic policies.

The crime issue appears to have dragged on the campaign of New York’s Democratic Governor Kathy Hochul, who saw her lead in polls shrink to single digits as Republican challenger Lee Zeldin campaigned on crime and controversial bail reform laws.

No Republican has won the governor’s office in New York since 2002.

Wisconsin’s Democratic incumbent Tony Evers faces a strong challenge from Republican construction magnate Tim Michels, who has promised to enforce a 19th-century abortion ban that Evers is challenging in court.