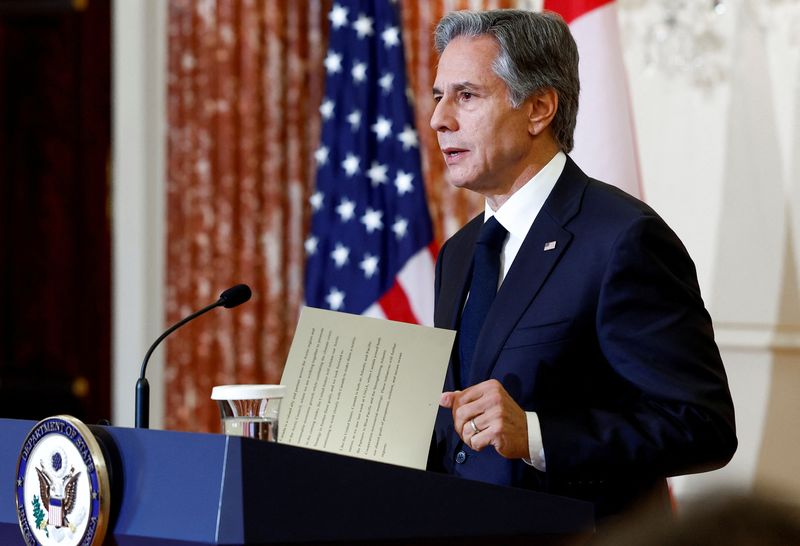 By Humeyra Pamuk and Matt Spetalnick

WASHINGTON (Reuters) – Secretary of State Antony Blinken heads to Latin America on Monday to reassert Washington’s commitment to the region and meet with three new leftist leaders, amid concerns that neglect of the hemisphere has let China make economic inroads.

During his week-long trip to Colombia, Chile and Peru the top U.S. diplomat will also attend a ministerial summit and hold talks on regional challenges including migration, drug-trafficking, post-pandemic recovery, climate change and the Venezuelan crisis.

U.S. officials acknowledge privately the need to show the United States’ southern neighbors they remain a policy priority despite the focus on big geopolitical issues such as Russia’s war in Ukraine and China’s threat to Taiwan.

Officials remain hopeful that Latin America’s new leftist leaders will not govern as ideological firebrands and instead continue to maintain a free-enterprise-friendly approach and nurture U.S. ties.

“We are not judging countries based on where they fall on the political spectrum, but rather their commitment to democracy, the rule of law and human rights,” Assistant Secretary Brian Nichols, the State Department’s top diplomat on the Western Hemisphere, said in a briefing call.

“And I would note that we are also visiting three countries that have been longtime vital trade partners of the United States, countries with free trade agreements with the United States … We are focused on strengthening our relations with those governments,” Nichols said.

Blinken will aim to solidify U.S. partnerships in the face of an increasingly ambitious China that has been expanding its economic footprint across the resource-rich region, which was once Washington’s geopolitical backyard.

“This (the trip) reflects the interest of the United States to pay more attention to Latin America, and specifically South America in this case, in terms of the deepening relationship there is with China,” said Guillermo Holzmann, a Chilean academic and political analyst.

The trip, Blinken’s first in almost a year to the Andean region, will kick off a day after Brazilians head to the polls for a highly-polarized election, in which leftist candidate Luiz Inacio Lula da Silva is leading in opinion polls against the far-right populist President Jair Bolsonaro.

Blinken’s first stop, in Colombia, could be a test of long-standing close U.S. ties. Its new leftist president, former rebel Gustavo Petro, has derided the U.S.-led war on drugs as a failure and called for a new international approach.

The South American country is a top producer of cocaine and has historically faced pressure from Washington to eradicate drug crops. Petro has also moved to re-engage diplomatically and economically with the government of Venezuelan President Nicolas Maduro, despite U.S. efforts to isolate the OPEC country.

Blinken’s trip comes after a rare prisoner swap on Saturday in which Venezuela freed seven U.S. citizens, including five oil executives, and the Biden administration released two relatives of Maduro held in federal prison in Florida on drug convictions.

Biden administration officials have struck a mostly conciliatory tone toward Petro, stressing areas of agreement on issues such as climate change and citing his appeals to Maduro to return to talks with the Venezuelan opposition.

Regarding Petro’s calls to end the war on drugs, Nichols said Washington strongly supports “a health and science based approach” to counter narcotics.

“This is reflected in our policy of supporting rural development and rural security in Colombia. And we believe that President Petro strongly shares that goal,” Nichols said.

But one U.S. official said Washington was watching closely whether Colombia’s outreach to authorities in neighboring Venezuela undercuts U.S. sanctions on Maduro’s government.

Blinken’s second stop will be Chile, where Gabriel Boric, a former protest leader, was elected as the country’s youngest ever president earlier this year promising ambitious social reforms amid a wave of political unrest.

But his approval ratings quickly fell and in September voters overwhelmingly rejected a proposed new constitution, forcing an overhaul of his cabinet.

Though Boric has openly criticized autocratic left-wing leaders such as Maduro and Nicaraguan President Daniel Ortega, he rankled U.S. officials by speaking out against President Joe Biden’s decision to exclude Cuba, Venezuela and Nicaragua from the Summit of the Americas in June.

In Lima, Blinken will attend a ministerial meeting of the Organization of American States (OAS) General Assembly, where Washington will push to pass a new resolution against Russia’s invasion of Ukraine after the group issued one in March condemning Moscow.

But there are doubts over how many countries will support the move after Petro said arming Ukraine would escalate the conflict. “We hope for strong support from all member states on the resolution on Ukraine,” Nichols said.

Blinken’s visit will come at a sensitive time for Peruvian President Pedro Castillo, a leftist who took office last year. Politics in the world’s No. 2 producer is highly polarized amid mounting allegations of corruption against Castillo and close allies. He denies any wrongdoing.