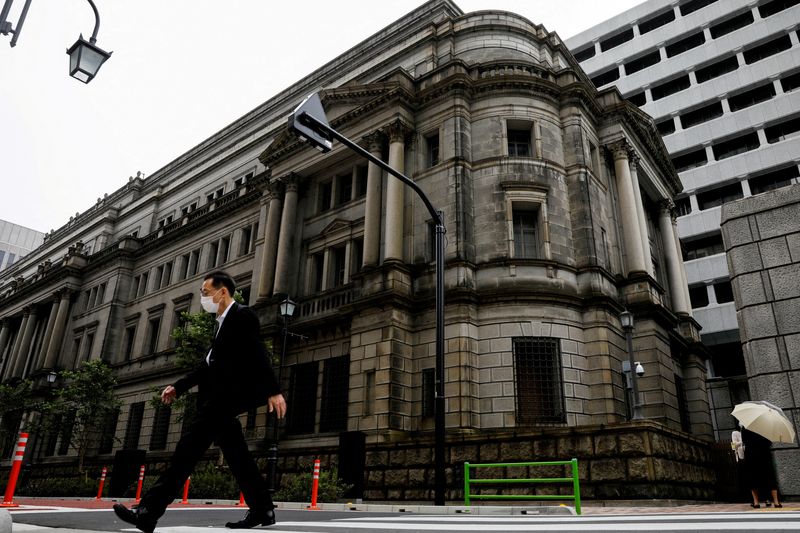 © Reuters. FILE PHOTO: A man wearing a protective mask walks past the headquarters of Bank of Japan amid the coronavirus disease (COVID-19) outbreak in Tokyo, Japan, May 22, 2020. REUTERS/Kim Kyung-Hoon

LONDON (Reuters) – The dollar’s biggest bull run in 40 years may have finally come to a screeching halt, now that the world’s last dovish central bank – the Bank of Japan – has finally relaxed its iron grip on long-term interest rates.

The BOJ shocked markets on Tuesday with a surprise tweak to its bond yield control, allowing long-term interest rates to rise more in a move aimed at easing some of the costs of prolonged monetary stimulus.

BOJ Governor Haruhiko Kuroda, who steps down in April, said this was a technical measure aimed at improving the way the bond market works and in no way was a form of monetary tightening.

Be that as it may, the timing caught investors off guard, sending the yen up by the most in six weeks and Japanese government bond yields to their highest in seven years – effectively doubling long-term borrowing costs.

The dollar has risen 9% this year, as the Federal Reserve has jacked up interest rates to combat inflation at 40-year highs. It has clocked the most gains against the yen, which has been weighed down by the BOJ’s policy of controlling longer-term yields.

As other central banks, from the Bank of England, to the European Central Bank, and the Reserve Bank of Australia, have raised their own rates, dollar bulls have run out of puff. Against a basket of major currencies, the U.S. currency is heading for its biggest quarterly loss since late 2010. But the dollar could, until now, count on its edge against the yen, to prolong its bull run.

“However we dress up the world, the Fed is crawling towards the end of its rate-hiking cycle,” he said. “The rate hikes are going to get smaller and smaller and eventually, there will be nothing and that will be the end of that story.”

Between late 1980 and early 1985, the basically doubled in value. This time around, it has gained almost 30% in under three years.

The close relationship between Japanese monetary policy and U.S. Treasuries adds another twist to the story.

With Japan being world’s largest non-U.S. holder of Treasuries, the fortunes of U.S. government debt are far more intertwined with those of the yen than anyone at the Fed might like.

“The question in the longer-term, then, is how does the rise in JGB yields affect the behaviour of investors?,” said Adam Cole, currency strategist, RBC Capital Markets, referring to domestic investors who own the bulk of Japanese government debt.

It all boils down to whether Japanese investors have hedged their Treasury exposure or not, he said.

Hedged 10-year Treasuries are now yielding less than -1%, according to Cole’s data, having fallen below the yield of a 10-year JGB earlier this year.

“Many JPY-based investors, who have enjoyed years of positive carry on hedged Treasuries, now a face a stark choice on what has become a deeply-negative yielding asset class,” Cole said.

As shorter-dated U.S. Treasury yields have risen – reflecting the belief among investors that the Fed will keep raising rates for the coming months – they have shot above longer-dated ones, which makes it far more expensive to hedge.

This pushes forward foreign exchange rates below current, or spot rates, meaning investors that have locked in their U.S. currency exposure – which they need to buy Treasuries – are faced with the prospect of losing out when they eventually swapped those dollars back into yen.

Any advantage an investor gains by holding higher-yielding Treasuries over JGBs is wiped out by the cost of the hedge.

“For a Japanese investor the question is – if I have to hedge, is there any point in holding (U.S. bonds) should I just be selling my Treasuries?” SocGen’s Juckes said.

At the margin, it would appear that selling Treasuries to take advantage of juicier domestic yields would be a good option. But the stress is on “at the margin”, not least because of the sheer size of Japanese investors’ holdings of U.S. debt, analysts said.

“In terms of Japanese investors bringing money home – even if you look on a dollar/yen basis for example, you still get an enormous pickup in U.S. Treasuries if you’re a Japanese investor, before switching back into yen,” Rabobank senior rates strategist Richard Maguire said.

“So I don’t think the maths stack up. I don’t think this sees a wholesale repatriation of Japanese investment back into JGBs, which would be negative for (German) Bunds, (Italian) BTPs and U.S. Treasuries,” he said.

JPMorgan (NYSE:) strategists say high-grade corporate bonds will also feel the pinch, as it fuels global volatility, but there is a silver lining.

(This story has been refiled to fix typo in the headline)