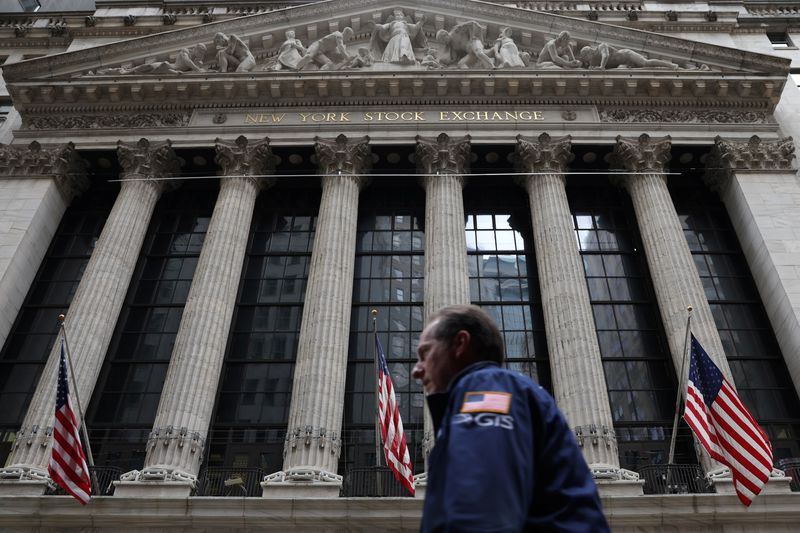 NEW YORK (Reuters) – A rough year for U.S. stocks is winding down, but the market’s pain may be far from over, as investors brace for an expected recession in 2023.

With only a handful of trading days left in 2022, the benchmark is down 19.8% year-to-date and headed for its biggest annual decline since 2008, as the Federal Reserve mounts its most aggressive monetary policy tightening cycle in decades to fight surging inflation.

While inflation is yet to be tamed, Wall Street’s focus is shifting to the potential consequence of the Fed’s rate hikes: a 2023 economic slowdown.

Firms projecting at least a mild recession include BlackRock (NYSE:), the world’s largest asset manager, Barclays (LON:) and Oxford Economics. Fund managers in a BofA Global Research survey named a deep global recession and persistently high inflation as the market’s biggest risks, with a net 68% forecasting a downturn as likely in the next year.

Recession worries are also filtering into asset prices, while the Treasury yield curve has been inverted since early 2022, a signal that has preceded past downturns.

“The consensus is pretty clear that there is going to be a recession in 2023,” said Chuck Carlson, chief executive officer at Horizon Investment Services. “The issue is how much has the market already discounted a recession, and that’s where it gets a little bit thornier.”

Concerns that the Fed will maintain its hawkish stance helped drive the S&P 500 down 1.45% on Thursday.

The National Bureau of Economic Research, the official arbiter of recessions, typically declares them in hindsight, and consistent job growth this year makes it less likely that a recession has already started.

If a recession starts next year, stocks could be set for another swoon: A bear market has never bottomed before the beginning of a recession, historic data showed.

“If we’re not in a recession now but we’re going into one that would mean that a retest of the October lows and a break of them is quite possible in the first half of the year,” said Ed Clissold, chief U.S. strategist at Ned Davis Research.

Stocks perform poorly during economic downturns, with the S&P 500 falling an average of 29% during recessions since World War Two, according to Truist Advisory Services. The index was down just over 25% in October from its Jan. 3 record closing high.

Stocks could also see a bigger move than usual next year. The S&P 500 has swung by at least 10% in either direction in the year after a decline of 15% or more, according to Bespoke Investment Group.

Investors are also gauging to what degree slowing growth has been factored into corporate earnings.

Consensus analyst estimates project S&P 500 earnings to rise about 5% in 2023, and to post at least a slim year-over-year gain in every quarter next year, according to Refinitiv IBES.

Yet earnings fall by an average annual rate of 24% during recessions, according to Clissold, leaving plenty of downside for profits if a slowdown hits.

“Stocks generally follow earnings,” said Matt Peron, director of research at Janus Henderson Investors. “If rate hikes take about a year to flow through the system, we are still six months away from the real teeth of it.”

One wild card may be whether consumer prices, which rose less than expected in November for a second straight month, subside quickly enough to allow the Fed to stop raising rates as soon as Wall Street anticipates.

While many investors believe rates will peak sometime in the middle of 2023, policymakers earlier this month said the benchmark interest rate will need to rise next year to a higher level than previously anticipated to cool consumer prices.

“The market focus is shifting from inflation concerns to growth concerns,” said Mona Mahajan, senior investment strategist at Edward Jones. “If there are any inflationary shocks that are unforeseen, that will derail the narrative.”

One way that could happen is if a recession hits early in 2023 and ends quickly. Bear markets on average have bottomed four months before the end of a recession, according to Clissold, of Ned Davis.

If a recession finishes by the end of 2023, “by the time we get into the second half of the year, we could be looking at a new bull market,” he said.