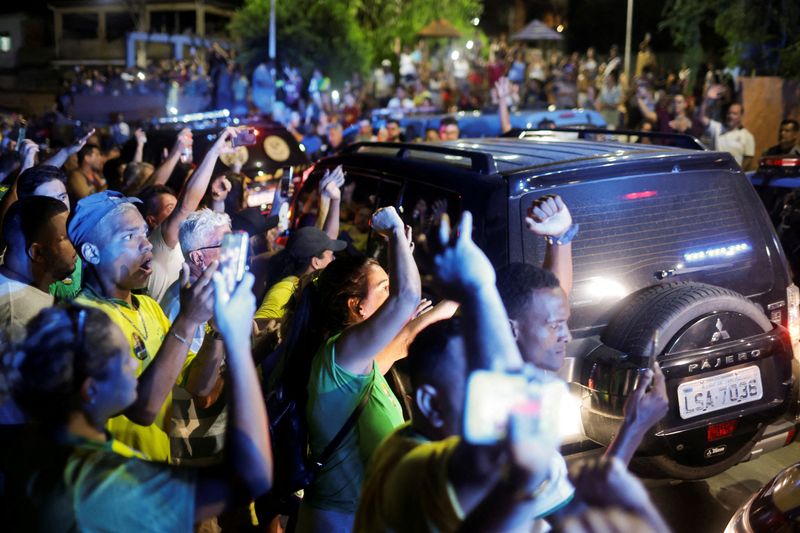 © Reuters. FILE PHOTO: Supporters of Brazilian politician Roberto Jefferson, who fired at police while resisting arrest ordered by the country’s Supreme Court, demonstrate close to his house as he is transported on a vehicle, in Comendador Levy Gasparian, Rio de Jan

RIO DE JANEIRO (Reuters) – A violent showdown between an ally of President Jair Bolsonaro and police over the weekend is stirring an already febrile election campaign in Brazil, as deep political polarization bubbles over just days before a tense runoff vote.

On Sunday, Federal Police officers went to the home of former lawmaker Roberto Jefferson to arrest him on the order of the Supreme Court after he attacked a judge in comments online. Jefferson was already under house arrest for his alleged role in organizing “anti-democratic acts” threatening courts.

When they arrived, Jefferson opened fire on their car, and threw stun grenades. Two officers were injured and more than eight hours passed until his negotiated surrender.

Jefferson’s conduct poses a major headache for the right-wing Bolsonaro, as he seeks to clinch re-election against leftist former President Luiz Inacio Lula da Silva in an Oct. 30 runoff. Police have long been core supporters of the president’s tough-on-crime rhetoric and are deeply divided over Sunday’s incident, officers told Reuters.

The violent showdown also hit Brazil’s currency and stocks, which tumbled on Monday as analysts flagged concerns of electoral violence and waning optimism that Bolsonaro could triumph in the vote.

“What we saw on Sunday could well be the prelude to a new wave of political violence, in particular amongst groups who won’t accept the election result if President Bolsonaro loses,” said Mauricio Santoro, a political scientist at the State University of Rio de Janeiro.

Lula’s campaign pounced on the incident with an ad calling it the latest example of “Bolsonarista violence” in a tense election that has seen a rise in threats and killings as the candidates discuss what is at stake in existential terms.

“Hatred, violence and disrespect of the law. Roberto Jefferson is not just a criminal, he is also one of the main allies of our adversary,” Lula wrote on Instagram.

Bolsonaro, who has railed against the Supreme Court for judicial overreach and urged his supporters to take up arms to avoid being “enslaved,” sought to quickly distance himself from Jefferson. In a short video address late on Sunday, Bolsonaro said anyone who shoots at police is a “bandit,” adding that his thoughts were with the injured officers.

But his assertion that “there’s not even a photo of him with me” backfired when opponents turned up pictures on social media of the two meeting at the presidential palace.

One of Bolsonaro’s aides said his campaign was now “very concerned about the next polling results.”

The most recent poll, taken before Sunday’s incident, shows Lula on 52.0% of support versus 46.2% for Bolsonaro.

Gustavo Cunha, Jefferson’s lawyer, said his client was not trying to kill the officers, telling Reuters “it was a shot to scare them – kind of like, get out of here.”

Jefferson’s arrest has driven division within the Federal Police, which has also fallen prey to the deep political polarization cleaving Brazil, according to more than a dozen officers who spoke with Reuters on condition of anonymity.

Brazil’s Federal Police did not immediately respond to a request for comment.

Some officers were angry that Jefferson appeared to have an arsenal of weapons in his home, including automatic rifles and prohibited grenades, despite being under house arrest.

Bolsonaro has made it easier for Brazilians to buy firearms, with permits given to hunters, marksmen or collectors up almost 500% since 2018.

In July, Reuters reported that the Federal Police disapproved of Bolsonaro’s gun policies, arguing they made it harder to police the country with the world’s most murders.

“How does someone cited in several criminal cases have an authorization to register weapons, including an automatic rifle?” one federal officer said. “What is his authorization to carry grenades?”

There was also anger over a video shared on social media showing one officer, Vinicius Secundo, smiling and joking with Jefferson, telling him that the two injured cops were “bureaucrats.”

“Whatever you need, we’ll do,” Secundo told Jefferson in the video.

In a message sent to his colleagues and seen by Reuters, Secundo defended his actions, saying he “entered into character to de-escalate the situation in the best possible way.”

Some officers Reuters spoke to defended Secundo, saying that outsiders did not understand police crisis management.

But other officers compared Secundo’s treatment of Jefferson with the reactions of the Brazilian police forces, the most deadly in the world, in their violent operations in Brazil’s ‘favela’ slums.

“If this were in a favela with a poor or black guy, it wouldn’t have gone down this way,” said one officer.

(Reuters) – A gunman opened fire at a St. Louis high school on Monday morning, killing at least two people and wounding six others before officers fatally shot the suspect, the…

LOS ANGELES (Reuters) – Comic actor Leslie Jordan, a prime-time Emmy winner for his role on the hit sitcom “Will & Grace” and a social media sensation during the COVID-19…